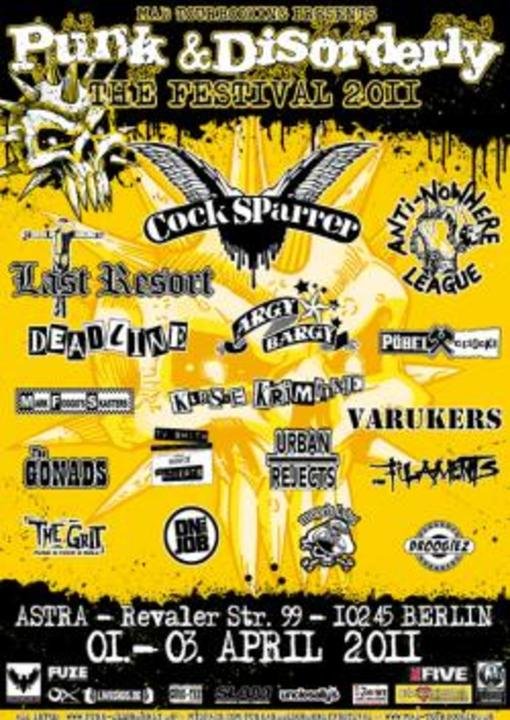 In the spring of the new year, Punks and Skins from across the world will come together to celebrate one of the biggest parties of the year! The Punk & Disorderly Festival is a sensation known across the globe, and everyone from the biggest cities to the smallest villages knows all about it. Those who have followed the vent over the years, are sure to know the festival has changed location from time to time. But to move the location away from Berlin has never come into question! Starting on the city outskirts in 2001, we have moved closer and closer to the city's center. Now we have again moved to a venue where we're sure the festival will be better than ever before.The Astra! With its location in the middle of the city, by the popular Warschauer Bridge, it has integrated itself wonderfully into Berlin's nightlife scene. And we're happy to say Punk & Disorderly will be held for the second time. One of our favourite headliners, COCK SPARRER, the best known Oi!-Punk-Band from Great Britain, will be sure to have the crowd singing along as soon as they start. We are extremely happy to have them playing the festival, and feels they give it that extra class it needs. Despite having such a highlight headliner, we were still determined to add other renown bands. Other top-acts include: Last Resort, Anti Nowhere League, Argy Bargy, Deadline, Klasse Kriminale, The Varukers, The Grit, TV Smith plays The Adverts, The Filaments, Urban Reject, Traditionals und die Moped Lads and more!
But that's not all the good news we have this month.we have also lowered the price of a weekend ticket from 53.- € down to 48.- € !!
And for those still not convinced, let this be said: there is no event that will be comparable to what will happen on this special weekend in April. Let this be a weekend where every individual contributes their part to the event as a whole, to make it more memorable than everyone than ever before.
Presented by