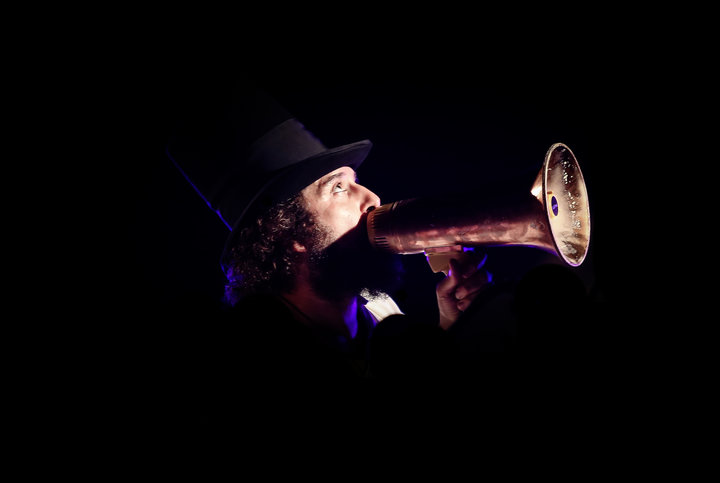 "Qu’Art de Siècle“
Phantasmagorical singer-songwriter, poet, writer, but also illusionist and showman, he debuted in 1990 with the album All'una e trentacinque circa under the the aegis of Renzo Fantini (Targa Tenco Opera Prima, an award he would be given another three times in the following years). After the first "pre-biographal" albums, from Canzoni a Manovella (2000) on he shifted his attention to more universal themes, often inspired by classical literature, from Melville to Céline, Dante and Homer. Works such as Ovunque Proteggi, Da Solo and Marinai, Profeti e Balene have been staged as total works of art. In 2004 he wrote the book Non si muore tutte le mattine (Feltrinelli), which gave rise to a shadow play performance and the Radiocapitolazioni broadcast by Radio 3.

He dedicated his most recent works to Greece and rebetiko, "more than a music, a way of life": the album Rebetiko Gymnastas, a documentary made with the filmaker Andrea Segre and the book Tefteri, published by Saggiatore and translated in greek and spanish. In 2013, he also started a new project with Banda della Posta, an elderly but still wild bunch of frontier serenaders, between Buena Vista Social Club and the Pogues, whom Capossela produced and toured with in Italy and abroad. 2015 is a very important year for Vinicio: his upcoming new book “Il Paese dei Coppoloni” and his new studio album “Le Canzoni della Cupa”, which will be released next winter, are the crowning achievement of his 25 years career, being both works the result of a deep elaboration about Irpinia, the Land of the Fathers, neglected by History, but full of legends, fairy-tales and fabulous music.
Presented by