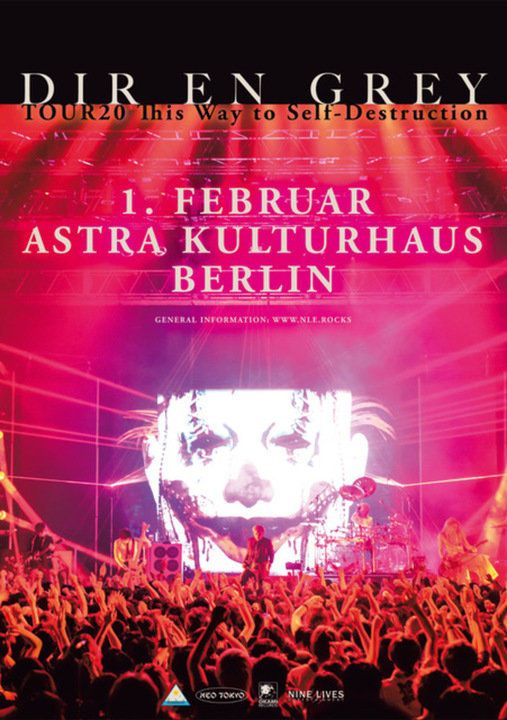 Masters of the bizarre - the uncommon and the uncanny are returning to rock Europe - DIR EN GREY.

After shaking several countries to the core on last years’ “’TOUR18 – WEARING HUMAN SKIN”, fans likely did not even dare to hope for the rock-legends to return to Europe so soon; but the members of DIR EN GREY granted the unvoiced wish, returning to Europe to claim the stages once more only roughly a year after hitting several countries full force!

The band will be heading back to Europe with their “TOUR20 This Way to Self - Destruction” in January 2020 to prove one more time that they can go even harder, facing the stages and their fans head on with a selection of their energetic and powerful songs.

After all, there are so many masterpieces fans would love to hear and the audience got only a bit more than a glimpse on the full splendor of the latest album “The Insulated World” at last years’ tour as well - leaving everybody even more excited to see which songs are going to be played this time.

Whatever the upcoming setlists will look like, undoubtedly the artistic fusion between old and new, combined with the sheer power and emotions hitting the listener hard in new songs and all-time-favorites alike, will drag both old and new followers right back into the nonpareil, sombrous world of DIR EN GREY.

For this EU tour the members surely are keeping busy yet again, visiting six countries and playing ten shows, starting from January 25th and continuing until February 8th. And not only the fans are excited, but the members of DIR EN GREY as well!

“The last time we embarked on a tour to Europe was only in 2018, but the response has been so huge that we are coming back for another tour. The members are looking forward the most to meeting our European fans again!” – Die, DIR EN GREY

With their steady advancements and their perfection in altering atmosphere and emotion in a second, DIR EN GREYs shows yet again promise to be events of the obscure, extraordinary and a pinch of melancholia, feeding the hungry minds of the curious.